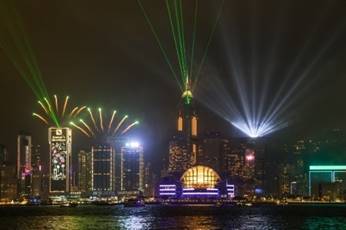 Hong Kong’s iconic Victoria Harbour lit up exceptionally bright as the city rings in 2022, taking its thriving art scene right to the global centre stage. At 11:59pm on 31 December 2021, the 65.8-metre-tall LED facade of M+, Asia’s first global museum of contemporary visual culture in the West Kowloon Cultural District, was transformed into a countdown clock, which travelled across the rich cityscape of Hong Kong.  Once the clock struck midnight, a special edition of the multimedia show A Symphony of Lights cast a dazzling array of visual effects across Hong Kong’s famous skyline complemented by rooftop pyrotechnics and lighting effects launched at various elevations, along with New Year’s greetings in 15 different languages on the M+ Facade, sending sincere blessings to the rest of the world.

The dazzling light art extravaganza across the harbour was synchronised with energetic, jubilant music performed by the Hong Kong Philharmonic Orchestra, the city’s flagship orchestra, in an outdoor concert in the West Kowloon Cultural District.