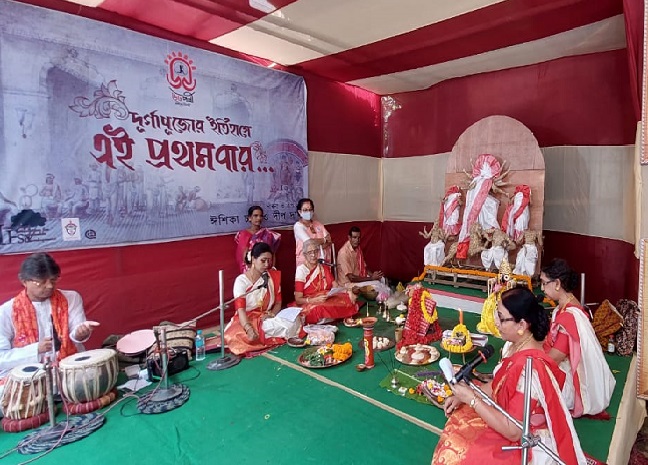 Breaking the barriers and creating history Maa Durga will be invoked by real life mothers at Kolkata’s 66 Pally. This for sure will be one of the most refreshing changes to see.

The season of festivities have begun and come October Kolkata will be decked up like a bride. Also, for the first time in the history of this grand celebration Goddess Durga will be invoked by mothers at one of South Kolkata popular Durga puja at Rash Behari Avenue’s 66 Pally. A group of four women in the city will break the age-old tradition and will be performing as priests at the upcoming Durga Puja in Kolkata. The group led by four priestess Nandini Bhowmick and her colleagues – Ruma, Semanti and Paulami – will be responsible for all the rituals in the five-day festival at 66 Pally.With this the puja committee will set an example in the long history of the annual festival in the city.

General secretary Pradyumna Mukherjee adds “after the death of our vetranmale priest last year we had to look for a new priest and that when we thought of bringing this change. Talks started around December last year will all four od the priestess and today we are actually shifting the paradigm in a big major day”

In the midst of Covid gloom this really seems like happy news. Adding further Mr Mukherjee further adds “All four esteemed ladies had their great command on scriptures and being professors in their respective fields, already practising priestess they fit the bill as a worshipper in every possible way. No where it’s mentioned that being a woman doesn’t make one eligible to perform Durga Puja. When women can make all the arrangements for conducting puja rituals in household and para (locality) puja, if there can be women clay modellers, if there can be women organisers, why not women priestesses?”.

With seven days left for pujo all four of them are geared up for the festivity. The whole idea of roping in the female gang came from a film “Brahma Janen Gopon Commoti” where the film revolves around the life of Shabari and her right to performing priesthood, dealing with menstrual taboos and standing up against the concept of Kanyadan. Shabari is a lecturer,performing artiste and priest. She picked up the art of priesthood from her father. The movie was inspired by Nandini Bhowmick’s life as a priestess breaking male bastion. “I have been doing all Hindu rituals for around ten years be it annaprasan, grihapravesh even including weddings. With this new challenge to perform Durga Puja it’s time that we are learning and improving their skills at every opportunity. We are going through all works of literature pertaining to Durga Puja. Society keeps evolving and it’s important to know them. We have read all the portions and selected the ones that we want to present. We have strung together Bangla songs in between hymns and chants,” said Nandini, an Indologist and visiting faculty at Jadavpur University. Her uniqueness has always been where she merges traditional values with modern beliefs and present day giving it a fresh new perspective to age old customs. Nandini even runs a Kolkata-based collective of priestesses called ‘Shubhamastu’, that’s led by her and her team Ruma Roy, Semanti Banerjee, and Paulomi Chakraborty who are known to perform Hindu ceremonies of weddings, memorial services, housewarming rituals, among others, for over a decade now.

The khuti puja (worshipping the wooden log) which was held 22nd August marked the inauguration of the puja at 66 Pally. The priestesses performed the puja for the same too. The puja committee has themed its puja as ‘Mayer Haate Mayer Abahon’ (Mother goddess will be worshipped by mothers), Durga Pujor Itihase Ei Prothom (first in the history of Durga puja).” 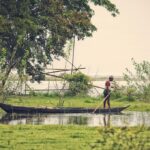 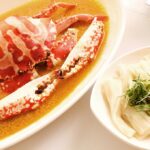